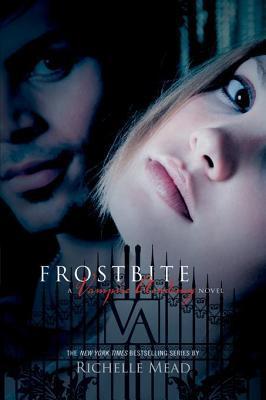 WHEN LOVE AND JEALOUSY COLLIDE ON THE SLOPES, WINTER BREAK TURNS DEADLY…

Lissa Dragomir is a Moroi princess: a mortal vampire with a rare gift for harnessing the earth’s magic. She must be protected at all times from Strigoi; the fiercest vampires – the ones who never die. The powerful blend of human and vampire blood that flows through Rose Hathaway, Lissa’s best friend, makes her a dhampir. Rose is dedicated to a dangerous life of protecting Lissa from the Strigoi, who are hell-bent on making Lissa one of them.

Rose has serious guy trouble. Her gorgeous tutor, Dimitri, has his eye on someone else, her friend Mason has a huge crush on her, and she keeps getting stuck in her best friend Lissa’s head while she’s making out with her boyfriend, Christian.

Then a nearby Strigoi attack puts St. Vladimir’s on high alert, and the Academy whisks its students away on a mandatory holiday ski trip. But the glittering winter landscape and posh Idaho resort only provide the illusion of safety. When three students run away to strike back against the deadly Strigoi, Rose must join forces with Christian to rescue them. Only this time, Rose – and her heart – are in more danger than she ever could have imagined.

This was such an amazing sequel to Vampire Academy and I highly suggest reading it right after the first book! It was super fast-paced and I wasn’t able to put it down. It definitely wasn’t as good as VA, but when is the sequel ever as good as the first?

I loved how much Lissa, Rose and the others developed from the first book! They were so much stronger, and more mature compared to the characters we first met when they were living at a college campus outside of St. Vladimirs. After what happened in VA, all of the characters weren’t as happy. They all carried a tiny bit of a depressed vibe, aside from Mason. Though, we will get to Mason later!

It was super cool that they took the trip to the mountains in this novel! I don’t exactly remember where they were, but it was nice to read about a bit of a different atmosphere than St. Vladimir’s! I thought it was so neat how all of the Vampires got to venture outside of their “home” for a little getaway. They definitely deserved it after what happened with Victor.

Something that I really loved about this book is how much Rose and Dimitri’s relationship evolved. I know that they tried to push each other away, but in the end, it was their attraction that kept them on solid ground. They supported each other in ways that other characters weren’t able to. But since they kept pushing each other away, they never got to spend that much time together.

And holy, Strigoi! I never expected that ending. And yes, I know that holy and Strigoi do not belong in the same sentence but that ending was insane! I loved how we finally got to see all of Rose’s training in action. And she finally killed Strigoi too. Though in the end, it wasn’t all tears of joy from earning her first two Strigoi kills. It was the time where Rose cried more than ever in the books. But what can you expect, her BEST FRIEND died.

Overall, I gave this book 4 stars! Although I loved it, I found that it wasn’t as good as Vampire Academy. But, it is definitely an amazing sequel to the first book!