Hello everybody! So, I know that I said that I was going to get into a habit of posting again but, I completely forgot about this week’s “Teaser Tuesday”. I was having a really good night and I actually finished an eBook (review soon) but I didn’t notice that I forgot the post until 10 pm. So, once again, I’m writing an apology on here and hopefully I’ll be able to post more!

But anyways, today’s review is on the wonderful Michelle Madow’s conclusion to her “Secret Diamond Sisters” series, Diamonds in the Rough. And before I even start, I just want to say that this series is a must read for contemporary lovers. I’m not the biggest fan of contemporaries but if they have quite a bit of romance…. I may just pick it up. 🙂 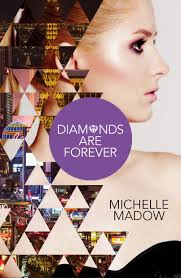 Diamonds Are Forever by Michelle Madow

It’s cold outside, but the drama is hot!

The Diamond sisters jet to the mountains for spring break, and Savannah’s flirt-mance with an international pop star heats up as her pursuit of stardom succeeds. But is this romance meant to be, or has the right guy been in front of her all along? Meanwhile, Courtney takes the next step with her secret boyfriend—and future stepbrother—and as their parents’ wedding approaches, the pressure’s on to reveal their relationship.

Peyton’s figuring out a plan for her future, but she still feels guilty about getting her former bodyguard fired and wonders if she can get over him in the arms of someone else. But the biggest bombshell will change everything once again, because Madison’s ready to tell the huge secret she’s uncovered. And with the boy who betrayed her but who could be the love of her life fighting for his own life, she might need the Diamond sisters more than ever.

This book was such an amazing conclusion to the series. When my friend first recommended “The Secret Diamonds Sisters” to me, I was kind of iffy with the title. It sounded just about as cheesy as “Anna and The French Kiss”. But, the cover was pretty so I gave it a go anyways. And yes, I know how the saying goes, “Don’t judge a book by its cover”. Well, we all know that we are quite a bit more attracted to pretty covers than ugly covers. Okay, enough said. So I borrowed if off my friend and I fell in love with the Las Vegas life of wealthy Diamond sisters. (And of course those steamy scenes between Damien and Savannah).

This series has been quite a roller coaster ride but, we have finally touched down at the end. But, the end is just the beginning.

Throughout the whole book, I definitely liked Savannah the most. She is probably the most like me out of all of the sisters. With her bubbly attitude and her blonde hair, we are basically twins. And I loved reading about the growth of Savannah and Damien’s relationship and how it expanded to a point where they knew that they were perfect for each other.

Courtney and Peyton also both had amazing endings. Courtney ended up with her “step-brother”. That kind of sounds weird at first but as you learn how much Courtney and Brett love each other, you would understand. Peyton ended up with someone who she was deeply in love with but unable to see. Jackson. Ohh I loved these two together. They were so cute!

The long awaited Madison announcement came about halfway through the book and I was super happy. I felt terrible for Madison while reading Diamonds in the Rough. But then, she announced it and after a time of silence from the sisters, they all became a family.

This book was definitely one of my favorite endings to a series and I can’t wait to read more of Michelle’s novels!